People who are familiar with Android OS might feel some of the software functionalities provided in Android OS should be made part of iOS but there are no easy ways of getting them then Jailbreak tweaks. One such kind of functionality is Haptic Feedback on Keyboard which gives you real vibration feel of some activity going on rather than simple sounds. Although for some such functionality is irritating but on the other hand there are those who are so tempted to get that functionality on iOS.

It has been made possible by Ryan Petrich at a hefty price of 3.99 USD however you can grab it for free from Xsellize Repo. As we are also strong believers that Jailbreak was principally done to provide functionalities which open source OS can provide therefore it should not be charged by Jail breakers as done by AppStore itself. 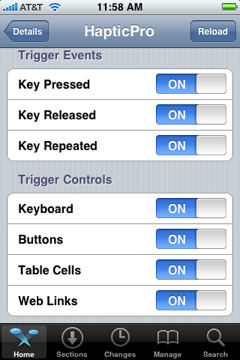 HapticPro not only provides functionality of making your keyboard give Haptic feedback rather it also gives same feedback on other buttons and iOS system interface. From settings you can even customize the vibration intensity, length of vibration, activation sources and trigger events.