by Muhammad Arslan Azmat on September 2, 2011 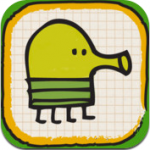 Doodle Jump is one of the most popular and additive games available for iPhone and iPod Touch however recently the game has been ported to support big screen display of iPad and iPad 2. Doodle Jump uses iPad’s accelerometer to allow Doodle to Jump from one shelve to another. You have to careful of the monsters in the way which might let you fall off the scene. It supports Multiplayer game play over WiFi (via Game Center) and Bluetooth. Achievements and Leaderboards are available in game Center in order to show off your progress to your friends. Doodle Jump is a must try Game for iPad and iPad 2. 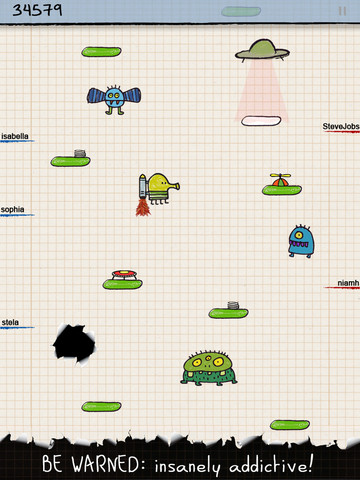 It is here! The MOST anticipated iPad game. After a long long wait. In full HD glory.

Used as a fashion statement by a Lady Gaga dancer, spoofed by Jimmy Fallon on Late Night, mentioned on The Big Bang Theory, and obsessively played by celebrities, Doodle Jump is a pop-culture phenomena; an iPhone sensation that has captivated millions of players around the world and was called “possibly THE BEST IPHONE GAME EVER created” by a leading iPhone gaming blog Touch Arcade.

The iPad version brings you all that you love in the original iPhone game with brilliantly rendered full screen iPad graphics, lush environments, and some AWESOME iPad-only features including a brand new multiplayer racetrack theme and Open Feint integration!

* BE WARNED: This game is INSANELY addictive!
* Don’t doodle jump and drive!

You can install Doodle Jump For iPad by following the procedure here for trial but please buy from AppStore for 2.99US$ it if your like it.